During Victorian era, the regiment formed part of the Highland Brigade at the Battle of Alma in September 1854 and the Siege of Sevastapol in winter 1854 during the Crimean War;
it also formed part of that brigade at the Siege of Cawnpore in June 1857 and the siege of Lucknow in autumn 1857 during the Indian Rebellion. During the Siege of Cawnpore the regiment captured a gong which has tolled the hours in the regiment's guardroom ever since. During the Victorian era, in November 1821 the regiment returned home from Ceylon. It was posted to Gibraltar in August 1827 and to Nova Scotia in April 1838.
After returning to England in June 1841, the regiment succeeded in having its Highland status restored, in so far as it was re-designated The 73rd (Highland) Regiment of Foot in 1845.
In January 1846, the 73rd Highlanders arrived in Argentina to project British interests during the Uruguayan Civil War. The regiment then sailed on to the Cape Colony to take part in the Seventh Xhosa War. In 1852 a detachment from the regiment departed Simon's Town aboard the troopship HMS Birkenhead bound for Port Elizabeth. At two o'clock in the morning on 28 February 1852, the ship struck rocks at Danger Point, just off Gansbaai. The troops assembled on deck, and allowed the women and children to board the lifeboats first, but then stood firm as the ship sank when told by officers that jumping overboard and swimming to the lifeboats would mostly likely upset those boats and endanger the civilian passengers. 357 men drowned. In 1857 the regiment helped to suppress the Indian Rebellion seeing some action in Central India. In 1862 it received a new title becoming the 73rd (Perthshire) Regiment of Foot. The regiment was posted to Hong Kong in 1866, back to Ceylon in 1871 and to India in 1874.

In 1881, the 1st Battalion deployed to Dublin, Ireland and the following year the battalion, as part of the Guard Brigade, took part in an expedition to Egypt, which came about in response to a revolt led by Urabi Pasha, an Egyptian military officer. The Scots Guards gained the battle honours "Tel-el-Kebir" and "Egypt 1882" for their taking part in the Egyptian Expedition, and it was the last time the regiment carried the Colours into war.

In 1885, the 2nd Battalion took part in the Suakin Expedition to the Sudan, taking part in the Battle of Hasheen, and gaining the battle honour Suakin 1885 for their part in the campaign The battalion returned home to the peace and quiet of the UK in late 1885 and took part in Queen Victoria's Golden Jubilee Military Review in 1887. In 1895, the 2nd Battalion of the regiment deployed to Dublin and returned to their barracks in London in 1897, with the 1st Battalion deploying to Dublin that same year.

In 1899, war broke out between the British Empire and the Dutch Boer Republics, the Transvaal and the Orange Free State. The 1st Battalion soon departed Ireland for South Africa to join up with the 1st Guards Brigade, and reached that country in November. The battalion quickly saw its first engagements in November, at Belmont, and at the Battle of the Modder River. In December, the battalion took part in its first major engagement of the war at the Battle of Magersfontein. The Boers, well defended in their positions, poured a terrible fire into the attacking British, causing very heavy casualties, with the battle ending in a defeat for the British.
In 1900, the 2nd Battalion departed the UK for South Africa, landing there in April, whereupon it joined the 16th Infantry Brigade. The Scots Guards then saw action at another major battle, at the Battle of Paardeberg, which last for a number of days in February, though the Boers there were eventually defeat when the Boer leader Piet Cronje surrendered. The following month, the regiment took part in the Battle of Driefontein and in May, the 2nd Battalion took part in a small engagement at Biddulphsberg and on the 31st, the regiment was present at the capture of Johannesburg. During their time in Africa, the regiment performed a variety of duties, including manning blockhouses, rather than just their involvement in the many battles of the war. In 1902, the regiment returned home, having proven their professionalism once more to the world, and returned to the usual public duties that accompany the Guards. 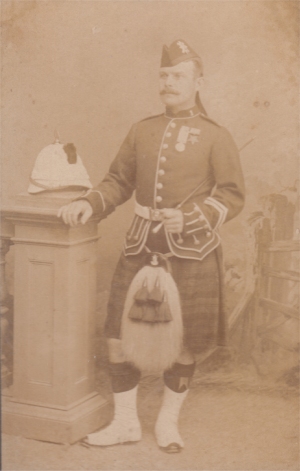